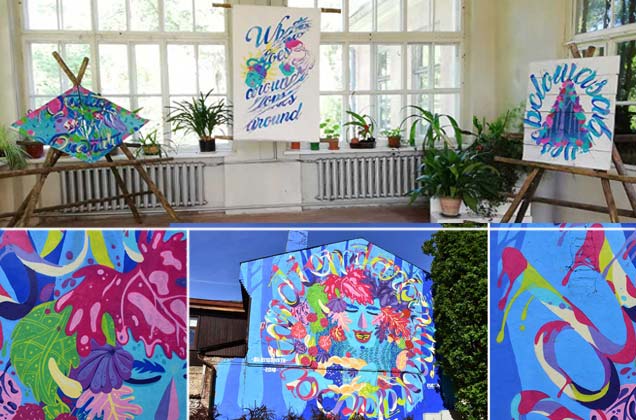 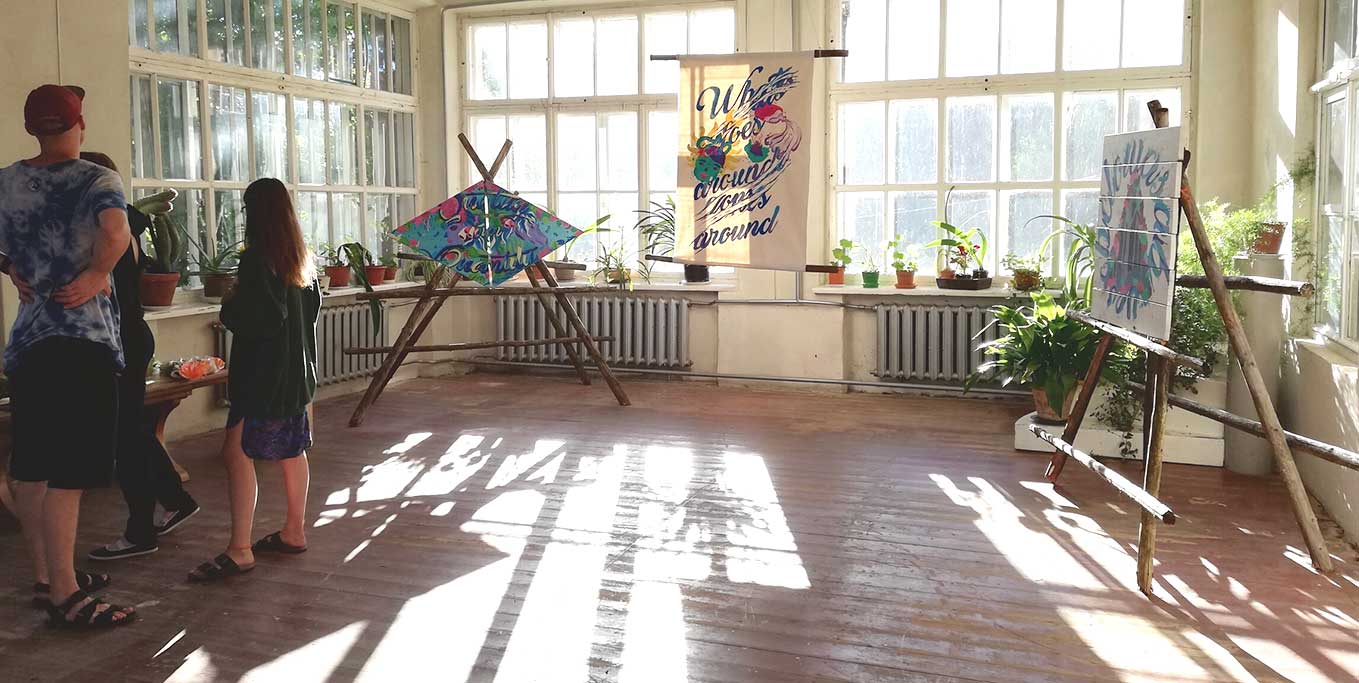 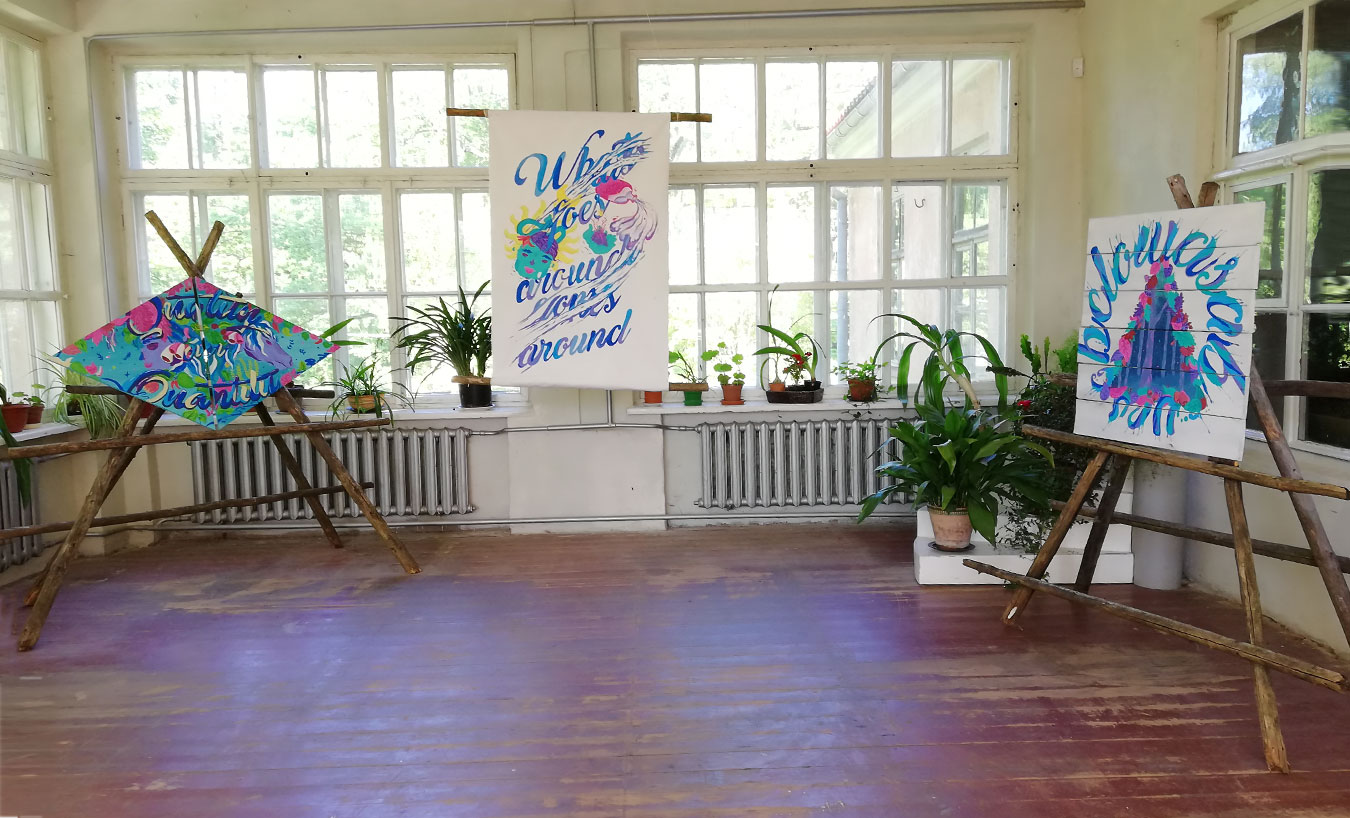 In May of 2018, we were invited by Rucka Artist Residency to do a one-month artistic stay in Cēsis, Latvia. Throughout the month we were developing several projects, including a mural, a workshop and a final group exhibition with the rest of the artists in residence.

MURAL
For the mural, we used the Latvian phrase “Darbi runā skaļāk par vārdiem” (actions speak louder than words). In this case, we were referring to the actions that make ancestral traditions endure. The typography was painted as a circle. In the center, an illustration inspired by Jāņi, the most popular Latvian holiday in which the summer solstice is celebrated. From the mouth of the figure comes a universe representing all the popular songs they sing during the festivity.

Families and friends meet to go up the mountain collecting flowers and plants with which they will create a crown for their heads. Throughout the night they dance and sing around a large fire waiting for the sunrise. Latvia was the last country in Europe to become Christianized and it shows. Even today, the inhabitants live with nature in a very special way.

In addition, we also offered a Workshop for all those interested in learning how to paint a mural. In this workshop, children, youth and adults could learn how to use sprays and acrylic paint on an exterior wall.

EXHIBITION
On May 26 was the final presentation where we were exhibiting our three paintings developed during our stay at Rucka. These paintings are the following:

As above so below
The triangle is one of the most common symbols in the Latvian folklore. It symbolizes God (Dievs). In this case, we wanted to represent this God as the oldest one: mother nature (Zemes māte). Therefore, the triangle is full and surrounded by different elements taken from nature, but with a magic atmosphere on it.

The phrase As above So Below talks about how in the past looking at the sky they could know what was going to happen. This is because again, you can find wisdom in nature, in the sky. Also, in Latvian folklore, the triangle symbolizes God as a synonym of the sky, so this phrase makes even more sense.

Quality Over Quantity
This rhombus-shaped painting was inspired by Ūsiņš, a deity in Latvian mythology, the god of light and spring, symbol of fertility, guardian of horses and bees. With Ūsiņš Day fields and leaves on the trees become green. Latvians celebrate Ūsiņi on 23 April. It also has it own symbol, which is like two letter E facing their backs against each other.

The typography says “Quality Over Quantity” referring to the way we live in a society in which sometimes we get sick. A society based on individualism and having more than others. With this work, we want to make a small tribute to people who formerly lived in harmony with nature and where the quality of life was above the number of things they obtained.

What Goes Around, Comes Around
In this piece, there are several concepts taken from the mythology and popular Latvian folklore. The most striking ones are on one side, Saule, the solar divinity, along with the moon. And on the other side, we can see the rite of libation, the act of pouring out liquid as an offering to the gods and the dead. As illustrated by the typography saying What Goes Around, Comes Around, one’s actions or behavior will eventually have consequences for one. With this rite, they were trying to keep the gods happy in order to bring abundance during the next season.

Posted in: Art, Digital Illustration, illustration, Mural
Do NOT follow this link or you will be banned from the site!